Let me preface this with a shameless plug to my blog explaining my relationship with Strideline Socks HERE. You can buy some socks with my special link HERE!

Well, the season is starting to heat up and get fun! I went 4-1 last week, bringing my season record to 18-11-2. I can’t believe I gave out Oregon State, and they covered.

I know I say this quite a bit, but I really like some lines this weekend. Some numbers really popped out to me, and you’re about to see ’em.

Just like Penn State, I am addicted to Michigan. I can’t quit them. However, this line is waaaaay too short. This is a very obvious overreaction from Vegas, knowing people will start fading Michigan. My first thought: there’s no way they continue to be as sloppy with the ball as they have been. That’s just unreasonable to assume. So now, with a clean game, at home, with superior athletes everywhere except maybe Iowa’s defensive line, you think Michigan is only three points better? Nope. Much better.

ESPN FPI gives Michigan a 62% chance to win, and if you’re a loyal reader of mine, you know that that usually equals a spread of six or seven, not three. There’s some built in value there. Furthermore, my projected spread is Michigan -4.5, so there’s another nugget on our side here.

On top of the projections, I just feel like Harbaugh has his back to the wall with the rumors of Michigan looking to fire him, and the team is fired up to clean up their game and win a big one for their fans and for their coach.

This is a good spot pick, and a good spot backed up by some metrics. Michigan covers and gets a much needed top 25 win.

Bo Nix has magic in that right arm. I’ve said it three times now this season. He is going to get better every single game. I love betting against Florida. They already can’t score, and Auburn has one of the best front sevens in the entire country. Good luck, Florida.

This may come back to bite me, but with a spread smaller than three, USUALLY just winning the game covers. Fuck, I’m mad at myself for even saying that. Lets hope this isn’t a gross non-cover Auburn win.

I think Auburn wins easy. Personally, I would have set this spread at Auburn -6.5, because I think they’re two scores better than Florida but you have to give them some home field love.

Florida is going to be in for a rude awakening and get punched in the face early, coming off of two wins against Towson and Tennessee.

The metrics suggest the spread of -2.5 is right, but I just love Bo Nix, and I’ve never trusted Florida to score against anyone, even at home. 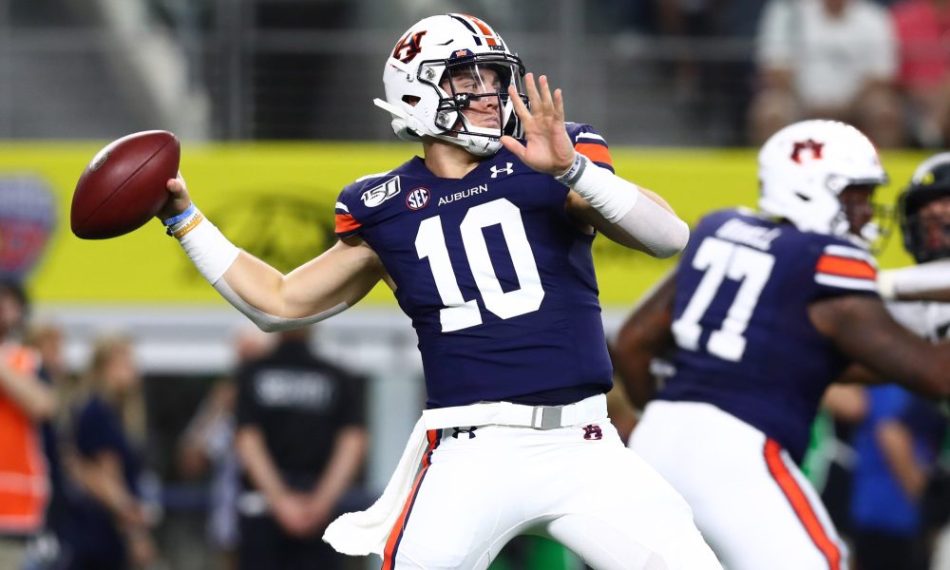 We hear every time Tom Herman is an underdog how good he is against the spread. They’re right. It’s insane. But that’s next week in the Red River Rivalry. Texas has covered like eight of the last nine against Oklahoma or something crazy like that. Why is this relevant? Because this is a classic look ahead spot. Not only does Tom Herman STINK as a favorite, but every team struggles the week before a big game when they’re playing a crap opponent.

Tom Herman and Texas has failed to cover six of the last seven seasons in the game before the Red River Rivalry. It’s just too hard to stay away from this.

Texas will win, but not by much. WVU covers.

I watched my Beavs cover, and lose to Stanford last week. I said it last week and I’ll say it again, this is not the Stanford team that we are used to. On top of Vegas knowing this just as well as me, but keeping the lines the same because they know the public likes big names like Stanford, Washington is starting to come into their own. Washington is good, really good.

Even at home, I have no idea how Stanford is going to score. I was in Corvallis for the Stanford game, and from what I could see, even if it was a little blurry after tailgating, Stanford just doesn’t have the size or speed that we’re used to. That’s a killer combo that they’re lacking.

ESPN FPI gives Washington a 78% chance of winning, which should equal a spread significantly higher than two scores. I’ll take my chances that Washington wins by more than two scores, seeing as how I could foresee Stanford being held to single digits.

The LSU hype train is fully loaded. EVERYONE is all over this offense, and for good reason. Everything points to betting the over in this game, which is why I’m betting the under.

LSU can score like crazy with this insane new offense, especially against a weak opponent like Utah State. Utah State plays faster than anyone in the country and slings the ball around. Over, right? Nope. Fade the public.

This is an early game. Baton Rouge won’t have a collective BAC over the legal limit like they do for night games. The teams will be sluggish. The crowd will be silent. Utah State has to travel east. LSU may go up like 49-7 and then set the cruise control and end the game. Lastly, this is a little look ahead spot for LSU, who is hosting Florida next week.