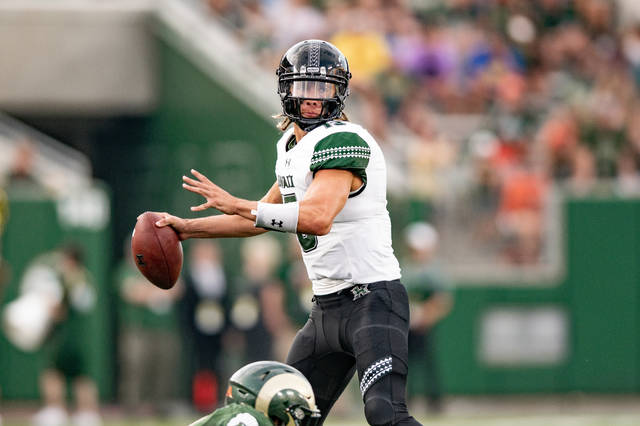 I told you a few weeks back, keep betting Alabama overs until further notice. This offense is scary good. Tua Tagovailoa continues to amaze us. We don’t need any analysis or stats to back this pick up, but to put this pick in perspective, Bama is a 35 point favorite, and the total is 57. That means Vegas thinks Bama will win something like 42-14. Personally, I think Bama scores 40 in the first half.

My only worry is that Bama is winning big too early, and Saban calls off the dogs and puts in the third and fourth stringers, who failed to score against UL-Lafayette in the fourth quarter last week.

That’s not as big of a worry this week against an SEC opponent, so I think this over hits early in the game.

Kansas stinks, and they’re on the road against a top-10 opponent with a Heisman candidate at QB in Will Grier. However, Kansas has scored some points this season, averaging 29 points per game. They put 55 on Rutgers and 28 on Oklahoma State. If they can score 27 or 28 in this game, the over will hit in the third quarter because you know West Virginia is going to run it up.

West Virginia is averaging 42 points per game, and they’ve done that against better defenses than Kansas. If you simply added up averages, which is an AWFUL way to pick over/unders but I’m still going to consider it, the teams would score 71 in this game.

In my opinion, Will Grier and head coach Dana Holgorsen will want to run the score up now that they’re a top-10 team fighting for a College Football Playoff birth, as well as playing for some added Heisman hype. Every convincing victory counts, even against Kansas. A close game could hurt their resume at the end of the season.

I think it’s safe to assume West Virginia goes over their season average of 42 and scores 49, meaning we just need two touchdowns from Kansas. Very doable.

Texas +8 (vs. Oklahoma at a neutral site, Cotton Bowl)

I can’t go one day without saying, “TEXAS IS BACK, FOLKS”, like Joe Tessitore exclaimed a few seasons ago. In fact, they were not back yet. Also, Jason Witten is an awful color commentator on Monday Night Football and he’s ruining the great Joe Tessitore’s career. Anyways, BACK TO TEXAS, FOLKS.

Texas may in fact be back this season. QB Sam Ehlinger is finally playing up to his talent level. They have some really good skill position guys. The defense has been excellent, holding Kansas State, USC, and TCU all under 17 points. Coach Tom Herman has finally had some time to build his program at Texas. He also kisses his players all the time. Respect.

Obviously Oklahoma has been good this season, and the $5 million QB Kyler Murray is a big reason why. No need to discuss that too much, everyone knows their offense is good, behind the excellent play calling of head coach Lincoln Riley.

I have a few reasons for picking Texas here. Tom Herman is 11-1 against the spread as an underdog. Nuts. He is a master motivator of his guys. Maybe because he kisses them all the time. Also, this is a huge rivalry game that is always close and eight points is a lot. Finally, while Oklahoma has been playing well, they are not destroying anyone like Alabama or Ohio State have been doing. They MIGHT not be an elite team. Maybe. Oklahoma barely beat Army in OT, only beat Iowa State by ten, and failed to cover the spread against struggling UCLA.

Tom Herman as an underdog, a rivalry game, and how Texas has been playing so far. Texas covers.

The entire world is on Kentucky. They are surprisingly undefeated, they are a fun story so far, they are ranked #13, and they will be a favorite bet of the random public bettor. Vegas knows that.

Texas A&M is really good. They’ve only lost to Clemson and Alabama, and they almost beat Clemson. Kyle Field in College Station is nuts, especially for a night game. I think A&M wins big. I have no numbers to back it up, this is just going against what I think  is a classic sucker pick.

In nine combined games this season, these teams have gone over 61 points ONCE, and that was Arizona State last week against Oregon State. Any game against the Oregon State defense is going to be an outlier.

Herm Edwards likes to slow the game down and limit the possessions, like NFL coaches tend to do. We saw a great example of that when ASU played Washington down to the wire, and when they beat Michigan State. Both low scoring games where ASU controlled the clock.

ASU is an underdog here against Colorado, so if they score some points they’ll be looking to run the ball effectively and slow the game down so it is in reach in the fourth quarter.

Hawaii has been a fun team to watch this season. I have been a Hawaii fan for years now, and I don’t know why. Maybe because Colt Brennan was the man back in the day. Hawaii has surprisingly started 5-1, and if they win this one and go 6-1 they will most likely be ranked in the top-25. The players know that, and they know how important winning these conference games are. If they beat Wyoming here, they’ll expand their lead in their division (Mountain West – West).

Hawaii QB Cole McDonald has been electric this season, averaging 350 passing yards and four TDs per game. They’re slinging it all over the field, and Cole McDonald is a grinder of a QB. He’s not afraid to run it when he needs to and take hits, and he’s not afraid to make the difficult throws. He is the kind of QB that just wins games. Period.

Wyoming has been unimpressive so far. They only beat Wofford by three, and lost three other games by 20, 27, and 22 to power five schools and Boise State.

Wyoming’s offense has been awful, and I’m not sure why they’re only 3.5 point dogs here. If I handicapped this game, it would be Hawaii -10.